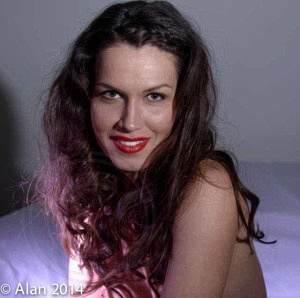 This month I had the privilege of working with Hayley, a model from Aldershot. As this shoot was going to be in a confined space the ability to use large strobes was not appropriate. This was going to be a shoot just using Speedlights . I was a little nervous as I had not used this mode of lighting ‘in anger’ before. I sought the advice of some colleagues who explained that, because it is not easy to meter the light, this would be more on ‘a trial and error basis’. Although help would be available I was determined I would ‘work it out for myself’.

I was amazed the amount of light three Speedlights can produce and the ease and flexibility of use. I had a few light modifiers to soften the light as I did find it a little harsh. Also I found it helpful to explain to the model why the lights needed to be so close so that the light did not fall off too rapidly.

Overall I was pleased with the shoot and although I made a number of mistakes I produced a number of very good images. I missed the amount if control I have when using large strobes but that is to be expected as I am somewhat of a control freak!